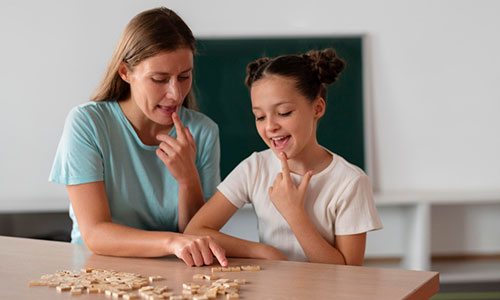 Are you or your child facing speech and other communication problems for some time and you are clueless about how did it occur, what to do and whom to consult? Don’t panic! Your problems can easily be cured!

My Child is Still not Showing Signs of Speaking!

There are many children who develop speech and language problems at a critical age. The first few years is very crucial for a child to learn and develop communication skills. It is because the synaptic density – that is, the neural interconnections – is the maximum at the age of 2-3 years, which means that the learning capability of the child attains its peak point at this time. So it is very important for you as the parent of a child with speech or language difficulties to intervene into the matter as early as within first 3 months of age, and to start a proper treatment at a recognised speech therapy clinic in Kolkata as early as possible.

If a child is deprived of a good hearing health, then he/she might suffer from delayed speech problems. So it is your responsibility to make sure that your child is given full access to the hearing world and at the appropriate time, delaying which will result in a delay of all the major developmental skills necessary for the child. Therefore, you must participate in early intervention programs to diagnose if there is any hearing disorder present in your child. Hearing loss is a major factor that largely contributes to a delayed development in every aspect in the child’s life, starting from delayed speech to delayed cognitive development. It is because of the fact that if a child does not hear properly, how will he/she speak and learn?

What to do in Case of an Adult having Speech Disorders?

However, apart from children, it might also be the case of an adult – which might be you, your near and dear one or someone you know, especially after being affected by stroke – who is suffering from speech and/or language disorders. It is therefore, important for you to know everything about different speech disorders, their causes and how do certified Speech Language Pathologists at any certified speech therapy clinic in Kolkata, manage these issues.

Why are there Different Symptoms for Different People with Speech Disorders?

Dyspraxia is a milder form of Apraxia – that is to say – while Dyspraxia is a fine and/or gross motor skills difficulty, Apraxia on the other hand, is a complete loss of motor skills, thus impairing speech of a person completely. Children with Dyspraxia might face difficulties in saying sounds, syllables and words. This is not a result of muscle paralysis or weakness. It occurs when the brain faces problems in properly planning which body part that is required for speech (e.g. lips, jaw, tongue) should be moved at what time. In simple words, the child is well aware of what he wants to say, but his brain fails to move the muscles of the speech articulators needed for him to say it out.

To conclude, if you feel you are facing difficulties in speaking recently, seek a proper treatment from a well-known speech therapy clinic in Kolkata.